skip to main | skip to sidebar

We had a reunion! Actually, a unit at the FieldStation DH was stationed at "back in the day" in Germany, had a get together at a German (Bavarian) Restaurant in Maryland. His instructor from School (we are talking late 70s here, folks) was there... I heard a LOT of stories... whoooda thunk it... Painting the tank PINK? having chair races? His rep at work would suffer... he he.

Food was Bavarian/American (my chief quibble, the Rotkraut was waaaay too sweet. ) but the Bier was good, the company was marvelous and we even liked the accordion players, the Austrian woman yodelled really well and of course we sang along where we could... all in all a great time.

A welcome change from work. This week has been a nightmare. I took over a file - with 20 some plaintiffs, from a young "paralegal" (with NO training, just a smart pre law student making some $ before law school) who took it over from another one just like him. Oh. My. God. what a freakin' disaster. File integrity (all documents for one person in one file)? Nah, a piece here, a piece there... and finding interesting records in boxes labeled - miscellaneous.... nothing kept in the separate folders in the document management system - all in "unopened cases" Correspondence... I'm spending a lot of time - in fact until Friday afternoon ALL of my week- just finding/sorting/making folders - making some sort of order from chaos. and finding more chaos because nothing was done properly, records haven't been requested... oh, it's just FUBAR. Majorly FUBAR!

On the good side - I have two divisions of the firm asking me to work for them, one side is actually demanding I stop doing what I'm doing for the other division - told the young associate doing a lousy imitation of a Top Kick (who thinks he's just soooooo wonderful and that his sh*t don't stink) that since the partner in charge gave his go ahead - think I'll just keep going.. he can confront the partner if he wants to.

Yoga is going great - had one of those yoga classes on Thursday that was so amazing, it all flowed, the relaxation/meditation at the end was refreshing... A great one. And the massage I had that afternoon after work - heaven. The back is starting to ease up, the migraines are still slamming me - two large ones last week needing drugs... a couple of little ones that eased off by themselves/coffee/stretching/meditating...

So, my dear blog friends, another week gone.. today is up in the air. I've brought some work home, I need to write a few posts for ParentsZone.org, but if the weather holds, we want to head for Occoquan for a historic festival - from the looks of the sky right now.. not so much!

Peace for the body, the mind and the spirit - Namaste.

LAW
Posted by liberal army wife at 6:35 AM 2 comments:

this is one of my heroes. A man who survived brutal imprisonmentfor over a quarter of a century, held to his ideals (ok, so his former wife was a mistake!) and has called for the rich to help the poor, works for the fight against AIDS in South Africa when it was considered a taboo subject, and is celebrating his 90th birthday with the world!

LAW
Posted by liberal army wife at 9:12 AM No comments:

Oh, you just WON'T believe this one!

Talking to a young paralegal today..she's about to leave the firm to get her MBA - so you wouldn't think she was a true Twinkie. She was asking me about DH and what he does. She had just had breakfast with a friend of hers who is stationed at Bragg. When I asked what he did... she said he's an officer. "ok.... but what unit/type of unit" Infantry, I think, was her answer - sigh. BUT the best is yet to come, my children. Hearken to this:

She asked where DH was deployed to. I told her Iraq. She then asked:

No, I kid you NOT! I didn't snap back with something akin to "how dumb ARE you?" I said, thinking she might not have heard me, "I said, he was in Iraq". She asked again, oh did you go? My response finally was - no, it's a WAR ZONE...

sigh... It never ceases to amaze me!

Well... I had to go into work this morning, and the tourists have infested DC! the NEA is here too... 15,000 teachers and their families!! The Metro was just UGLY. But now, I'm back home and we are just going to veg.

In addition, I want to thank all of you, the readers who have family in the service, thanks for putting up with the BS, the inane rules, the deployments, the re integration problems. Thank you to those in the service, for the same list, and for putting yourself on the line, no matter what your opinions or ideas on the subject.

It's been a year since he got back to the States. One Year. we have been in the same zip code, except for a week or so, since he got home. and it's actually a little weird! I can hear it now.. LAW - how can it be weird to have your DH home?- Easy.. Be Army! We had two deployments, (one was 22 months) two schools, two overseas TDYs (that's what happens when you are AGR) So I got used to having the bed to myself, the TV remote to myself, eating what I wanted when I wanted (cereal for dinner is ok... right? Dairy, carbs...) That all adds up to about 8 months together, in little 2-4 week reunions, in FOUR years.

So this feels like an anniversary - last year we were in Minnesota, he called on my cell to let me know that he was going to be released from McCoy for the holiday (went back for 3 weeks to assist in the inprocessing of returning MN Guardsmen) A friend went down and picked up her DH and mine... our reunion was in the Starbucks Parking Lot... I've never had one of those big hug and kiss wave flags and scream reunion... and I am hoping (against reality) that I don't have to do that again.

So happy Independence Day to all, and Happy Anniversary sweetie!

LAW
Posted by liberal army wife at 5:57 AM 4 comments: 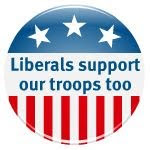 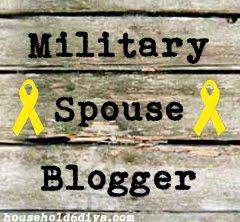 Life is a banquet and most poor suckers are starving to death ... Mame Dennis

Before you copy - please ASK!

This work is licensed under a Creative Commons Attribution-Noncommercial-No Derivative Works 3.0 Unported License.

Followers (but they Argue too!)

MilSpouses who think outside the box...

liberal army wife
I'm a liberal Army Wife, mother and Grandma, Democrat, and being a liberal made me a rarity amongst the National Guard wives of my aquaintance! Let's see how it goes now that we are in the Big A Army.

Links: Some of My Favourite Places